William Howard Seth-Smith was born on 23 August 1852, to William Seth-Smith of Tangley, near Wonersh (south of Guildford). His grandfather, Seth Smith, was himself responsible for buildings in Eaton Square, London.

William Howard was articled to a firm of architects, and attended the South Kensington Art School. He became a Fellow of the Royal Institute of British Architects in 1892 and was successively President of the Society of Architects and of the Architectural Association. From 1905 until shortly before his death on 30 August 1928 he was in partnership at 46 Lincoln’s Inn Fields, London with William Ernest Monro.

During his life he travelled in Italy, France, Germany, Holland and Belgium. In addition he painted water-colours, some of which were exhibited at the Royal Academy.

William Howard's father, William Seth-Smith, moved to the area of Wonersh in 1867 and became interested in the local church which, at the time, held its services in a local barn. (A watercolour by W.H. in 1880 shows the barn.) To help the church, he donated a piece of land, and commissioned his son, W.H. Seth-Smith, to design the building.

The foundation stone was laid on 21st April 1880, and the church (at the time named Tangley Congregational Chapel) was officially opened to an overflowing chapel on 25th September of the same year. (It is currently celebrating its 125th anniversary.) The cost of the building was around £2000, which was raised through donations. 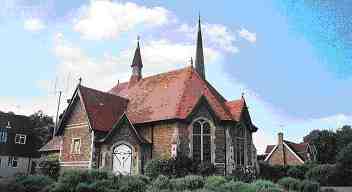 On its opening, the Surrey Advertiser reported it as:
...as pretty a place of worship as is to be seen for miles around... which reflects the utmost credit on Mr W.H. Seth-Smith, who, with the characteristic liberality of his family, has prepared the plans and superintended the erection gratuitously.

The church is in the Gothic style. The outer walls are made from Bargate stone with Bath dressing, and the inner walls of yellow bricks and panelling. The windows contain tinted glass.

The first wedding at the church took place in September 1887, between W.H. Seth-Smith's sister, Ethel Margaret, and the landscape painter, Alfred Hitchens. The wedding was a quiet one, a result of the recent loss of the bride's father. The bride wore white with a long train decorated in pearls; her three sisters were clad in white lace and silk with mauve tulle bonnets, and carried posies of white and mauve flowers. In 1895, they moved with their son, Ivon Hitchens (who also became a painter), to Homewood, Englefield Green (see below).

Apologies for the awful quality of the photo. I snuck into the crypt and only had my camera phone on me! 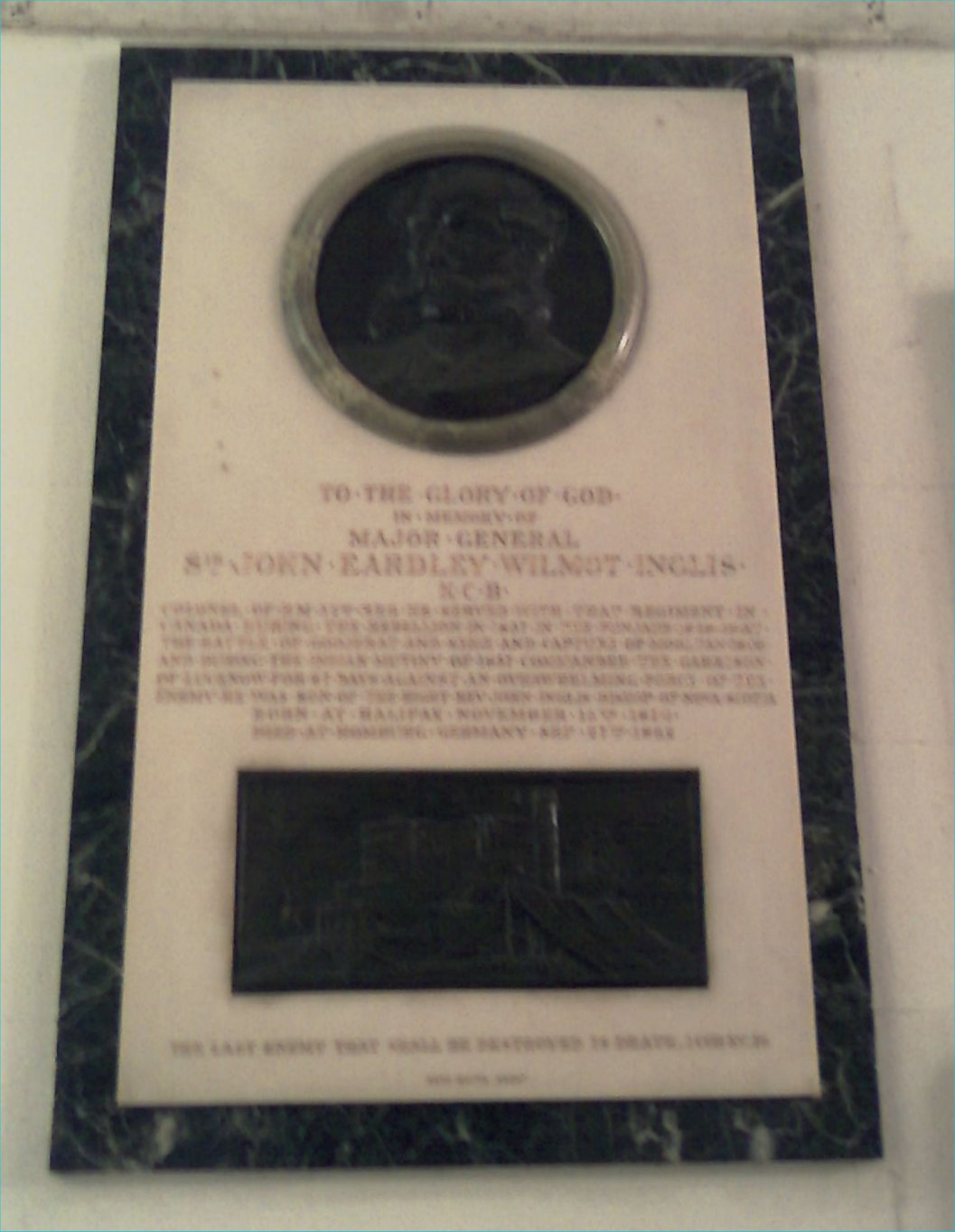 This church, near Wonersh, Surrey, was built at the latest in 1896. The commission apparently also arose through his father’s connection with the Congregationalists of Tangley. It is a very remarkable building, fortunately still in use, and led to the comment that:
Seth-Smith is all but unknown, part of the sudden and underrated flowering England had in the nineties. 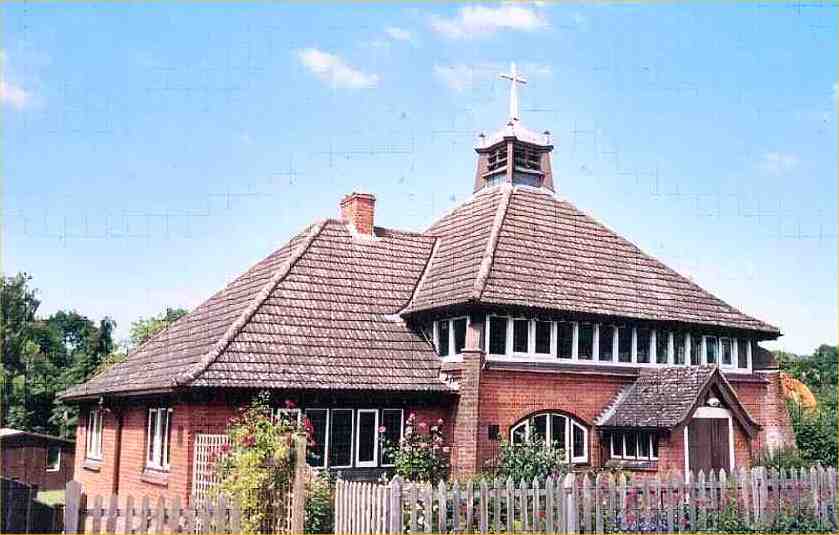 This church had its foundation stone laid on 21st October 1896, by Lord Cornwallis, and was consecrated on 10th September 1897 by Dr Eden, Bishop of Dover. It was built using the Church Building Fund, which had raised £7,650. 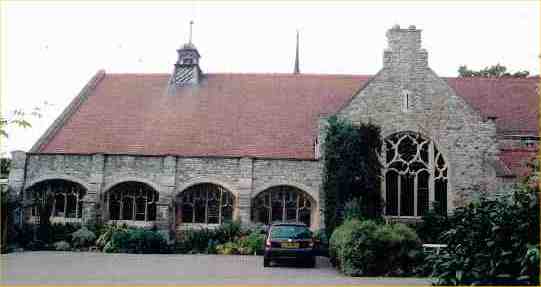 Much of the church was built using Kentish Ragstone from Vintners Quarries, with other features made from Monks Park stone, Broseley tiles and oak shingles. Its general design is of the Francois Premier period of architecture. 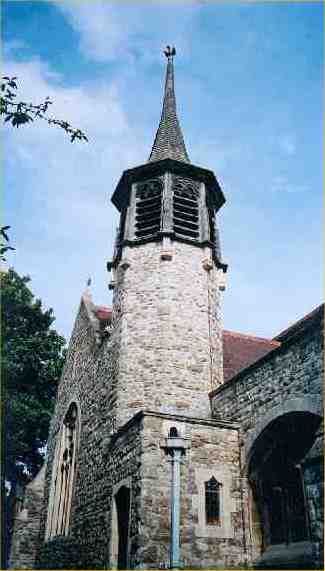 It has been described (perhaps unfairly) as:
...an all-out Art Nouveau affair, expensive, designed with the intensest care for details, but absolutely no delicacy of feeling. 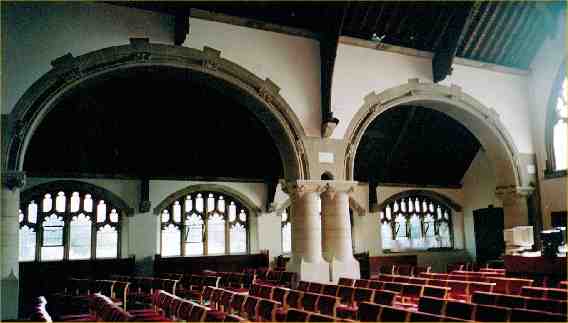 The church has strong links to the Urmston family, including the organ and a nearby tablet in memory of Captain H. Urmston of the Punjab Infantry Frontier Force, who lost his life in 1888 in the N.W. Frontier, while defending his friend.  The elaborately carved teak organ case has carved inscriptions of an ox of St Luke, the tree of life and the vine.  Below this is the inscription:
O come let us sing unto the Lord
and a dedication to the architect's parents-in-law:
TO THE GLORY OF GOD this organ was erected in loving memory of the late Colonel Henry Brabazon Urmston and Harriet Elizabeth Hughes his wife by their sons and daughters and members of the congregation, relatives and friends, June 1899. 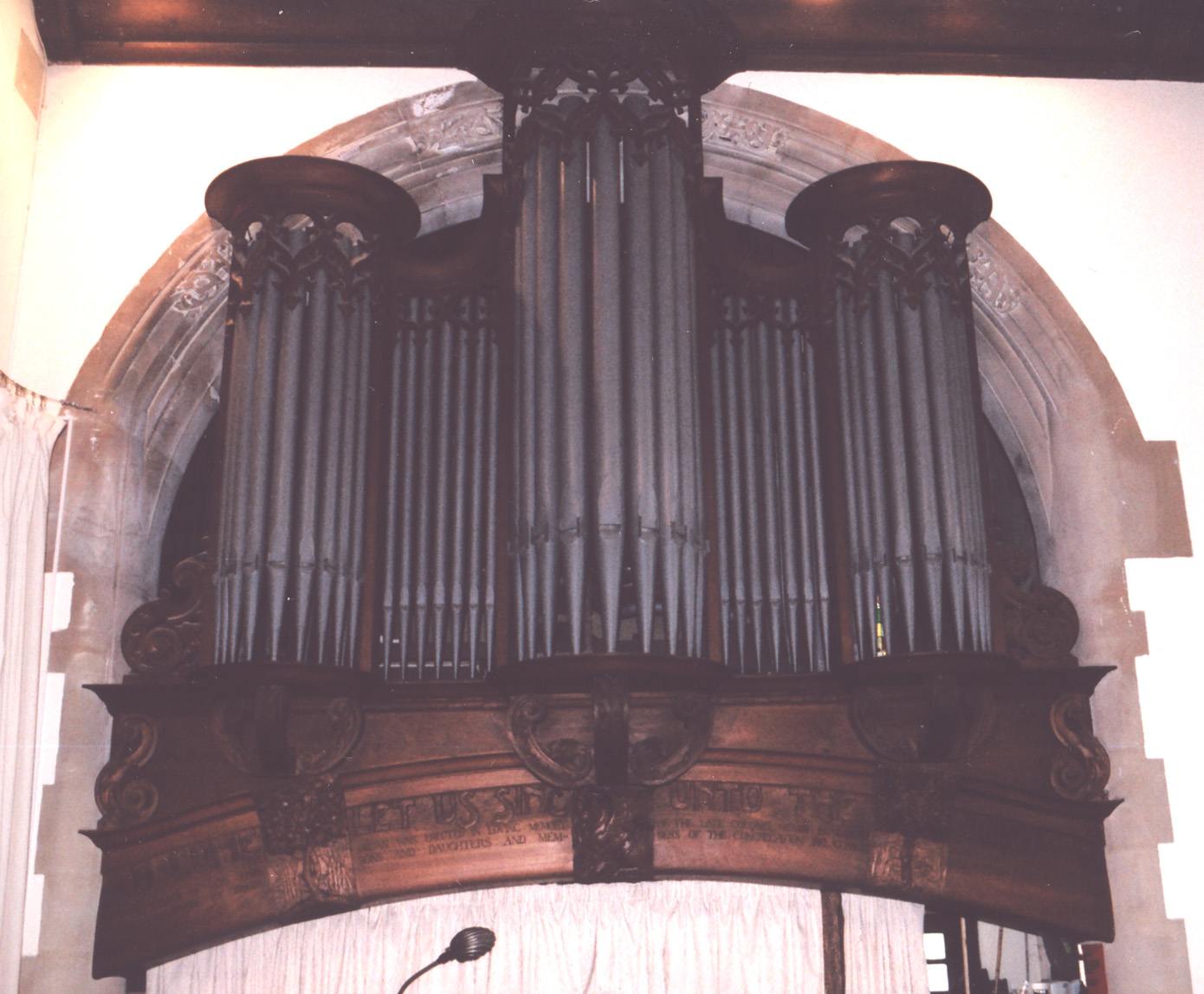 A family member, Ivon Hitchens (see above) executed a wall painting in the chancel around 1918.  The text above and below the mural reads:
the fruit of righteousness is sown in peace
and
the leaves of the tree were for the healing of the nations.

He described his work:
The river of water of life springing form the central pool, overshadowed by the Holy Spirit, symbolised by the dove; the stream winding through the forests of earth life; kingfishers flying along the stream, messengers of the Holy Spirit; the deer, an old symbol of humanity...; at the back of the pool, a bush with fruit, the forbidden fruit of the Garden of Eden; there are flowers, shrubs and various trees; including "the Tree of Life also in the midst of the garden" and "a river went out of Eden to water the garden".

The stone-laying ceremony for the new Wesleyan church at Englefield Green took place on 11 June 1903, with the building opened on Thursday, 3 May 1904. The commission for the church probably came through his sister, Ethel Margaret Seth-Smith. 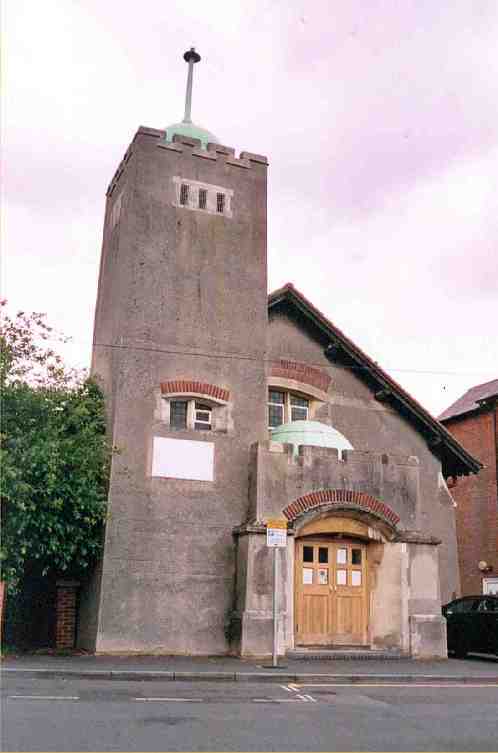 A journalist described it:
Outwardly, the structure is of a ... curious, and unusual design, giving the casual observer the impression of something oriental. This is due to the little domed tower in front, finished off with an ornamental spike, otherwise the building is of conventional type. 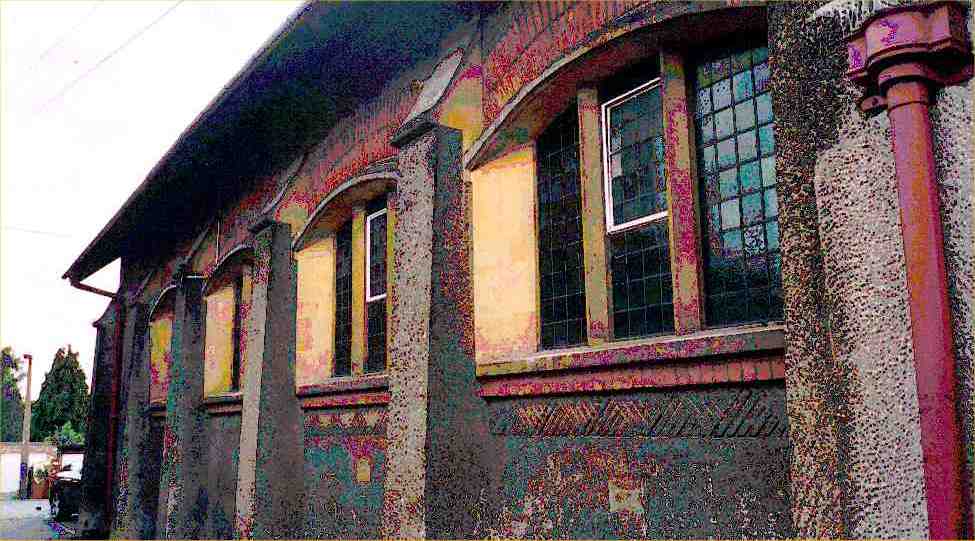 The design demonstrates that W.H. Seth-Smith was influenced by the Arts and Crafts era and one of its greatest exponents: his contemporary, C.F.A. Voysey. Features of the church include two domes, projecting eaves, prominent buttresses, a bold chimney and the use of roughcast. The gently arched windows with scalloped capitals above the buttresses have parallels in art nouveau architecture, whereas the bands of zigzag striations on the rendering, although reflecting a general interest in geometrical patterns at the turn of the century, look forward to the Art Deco period. This is far from being a conventional or ordinary building. 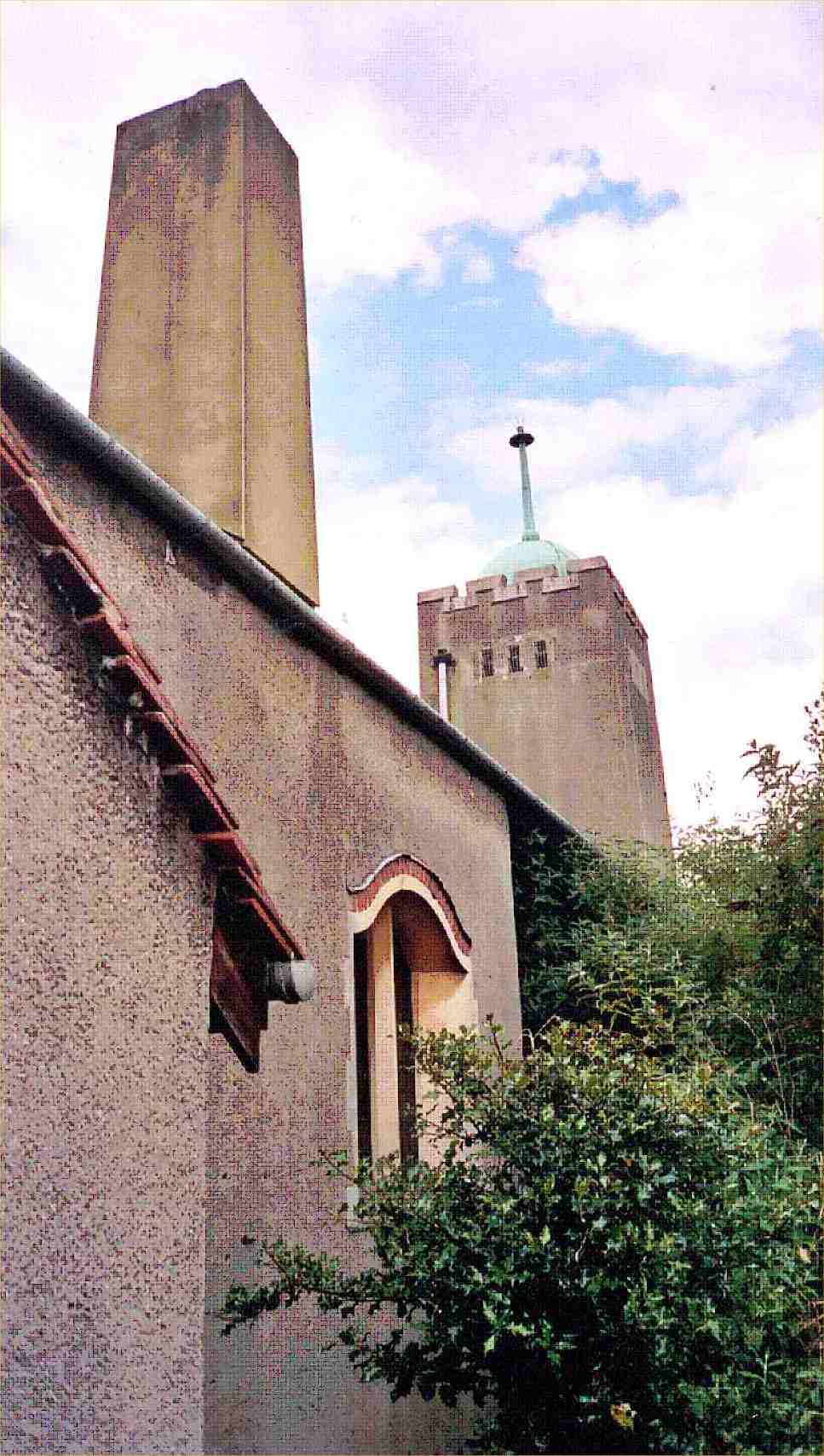 This interesting church was closed for worship, but is now (as of Summer 2006) to become the main place of worship in the village. However, other fine old churches and chapels are. If you are interested in trying to save them, please visit The Friends of Friendless Churches.

W. H. Seth-Smith designed this house, built for Miss M. A. Bevan, which was converted into 11 flats in c1964.
The residents seem to love the house saying that it "must have been extremely modern in its time, light and bright and friendly".

Many thanks to Judith Kramer for providing the information.